to pee or not to pee…. in the nappy, on the potty. Now that is what you call proper toilet training……..NOOOOOT 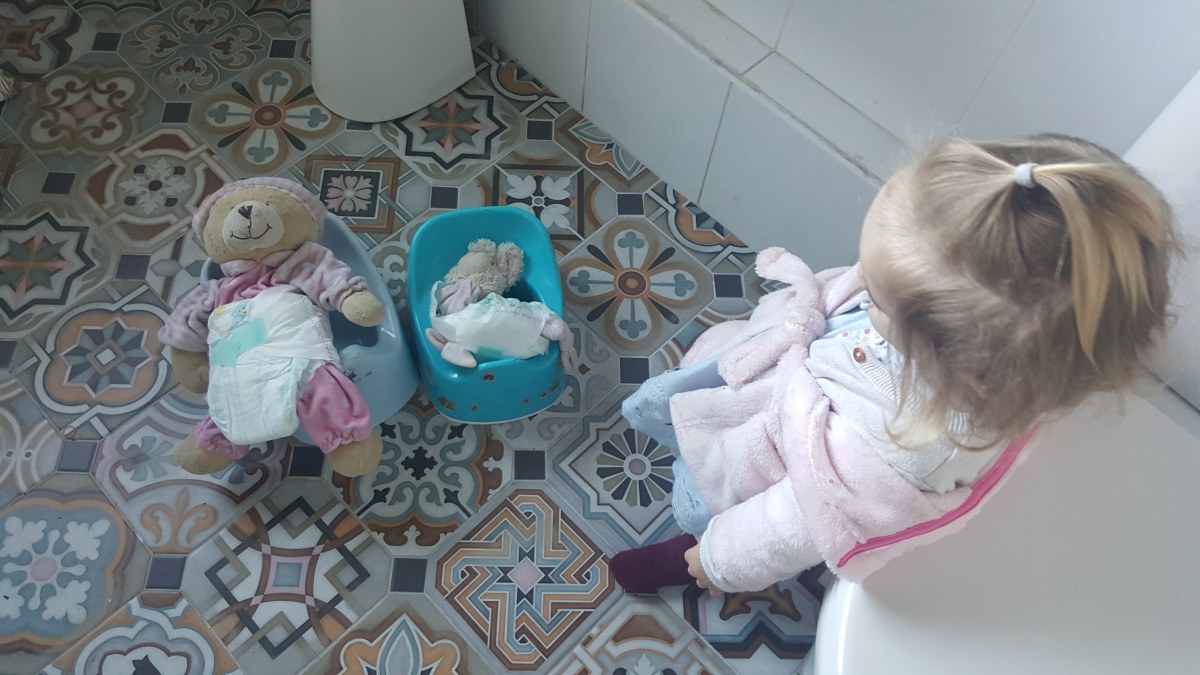 I remember the days well when my girls were only little tots and I would be running around like a blue arse fly, the twins usually going in different directions, while the eldest madam would be busy occupying herself away from both of them, seeking her sanctuary!  I would be double jobbing and multitasking at the rate of speedygonzales, only to find it would all need doing again, at the speed of light.  Going to work (outside of the mad house), to the actual office, with actual adults to communicate with, was often my sanctuary.

My husband and I had a fantastic relationship. By that I mean a fantastic telephone relationship.  We were passing ships in the night you see, him working nights and me working days.  Some times he worked days too, (every six weeks, for six weeks) but he was more than often a grump at night and just wanted to watch t.v after his hard days work.   It was very hard for him, going to work and coming home to a cooked dinner, cooked by me.  Coming home to children who if not in bed, were about to be going to bed, by me, having had their bath, done by , you got it, me.  That of course, was my job, after I got in from work.   Sometimes I just wanted to scream with the tiredness as my ‘shift’ never seemed to have a ‘clocking off’ time.

I would get home from work at 5.30 but hubby dearest didn’t get home from work until 7.30, giving me a good two hours with our delightful off spring, to cook, feed, play, wash and put them to bed before settling down to…….. do the washing, drying, ironing and not to forget studying, as I was also at college, trying to get myself educated.

In those days we did not have mobile phones, just land lines and without fail, my darling hubby would ring me every day from work and tell me he loved me and missed me and would see me later.  When later came, I got the cursory kiss on the cheek,  the ‘i’m starving, what’s for dinner’ and after that he would get all nice and comfy to settle down and watch t.v  !

There was many a time I just couldn’t wait to be in my 50’s, having raised my family and spend some good quality time with my fella, while we happily watched our delightful children stepping into the big  world outside of our house for their own crazy adventures.

Fast forward 28 years………  I don’t work at the moment.   I ‘volunteer’ in a charity shop two days a week ) but that is not work (right?) just a slight hint of sarcasm there!     I still have 2 teenagers at home, so if any of you have teenagers, you can feel my pain!  I do get to spend some quality time with my fella, as he is on a much better shift,  4 days on 4 days off.  Plenty of time for us to do things together, right….. wrong!

Sometimes we are lucky if we get to have lunch together in this hectic mad house of ours.  Yes, the big ones are grown up and don’t live here in the house, but they are never far away…….  One lives around the corner, the other lives a few miles away and another lives in the UK,  but comes home frequently.   Then of course, there is always the mobile phone, and by that I mean social media, messenger,  face time etc.  There is no escaping them, and their requests for ‘help’ and ‘support’, but does it really have to be so often!

This morning I had to take severe action…….. You see,  1 of the teenagers is away with the school on a lovely trip to Prague, so of course, that doesn’t just ‘happen’, things need to be organised, which they were, by yours truly.  The other teenager has gone to visit with an aunt for a few days.  Hubby had a training course to do in work.  Two daughters, with their children  came to visit…… in fact one daughter and her son have been here ‘visiting’ for 2 weeks (in fairness she had been ill and in hospital for nearly a week, while I looked after her wonderful son).  The other daughter came with only two of her children as the other was in school.  She too was wrecked (just as I used to be when she was little)…… as any mother is with 3 small children.  He tales of woe, were very similar to my tales of woe, at her age.  I feel her pain.  But when I was actually ‘living and feeling’ that pain, I couldn’t wait to not be feeling that pain, if you get my drift.   What I am saying is, it doesn’t end, it doesn’t end because, they don’t really leave.  They keep coming back with their children (whom I adore), but sometimes, there are days, when I still want to scream!

Yes I have a nice husband, nice home and nice kids, everything I ever wanted, but is it too much to ask for some peace and quiet in my own house, with no one else in it, just occasionally?   So just as daughter with the two children said she would soon be leaving, I shot a look at the other daughter, waiting for her response that hopefully she too would be leaving….. but no, nothing, not a squeak…..   Children shouting and roaring in the back ground, t.v blaring out BLAZE  for the millionth time this week and my house beginning to look like it had been ransacked by burglars, again for the 100th time this week, washing machine squeeling as it spun it’s best, vibrating as it went, due to its over use no doubt over the last two weeks, and the dark barking at anyone or anything that moved, as he too, appeared to be going mad with the constant flow of people, big and small, in and out, up and down stairs, doors slamming, bickering, food throwing, drink spilling, toast popping……..  What could I do but the only thing left to do, I asserted my rights!!!!

‘Ok, Ok, that is it’ I began.  ‘You go get yourself and himself dressed and head off, its time now you went back to your own house and left me in peace.  I have work to do and just cannot do it with anyone in the house.  I need to hear nothing…. no  thing….. .  No children, no chatter, no t.v, nothing  I want to hear silence, I want to hear my thoughts, I want to get on with my housework, in peace, just me and the dog, in the house, doing some work, or doing nothing, if I so choose, but whatever I choose, I want to do it without you being here!    It’s a beautiful day, maybe for a walk, or go to the park but whatever,  spit spot,  off you go’!!  I finally blurted out, trying to keep my composure before the top of  my head actually did blow off!

I wouldn’t change any of them for the world, but sometimes all a girl wants to do, is to be able to to get ‘stuck in’ even if it means ‘chucking them out’.  I must let you know a great deal was in fact achieved today and the amount of rubbish I ‘chucked out’ by getting stuck in was amazing and made me feel good.  I don’t imagine that is how Cinderella felt on a daily basis, but for this Cinderella, today was a good day!

Tonight, it is just my husband and me in the house.  I cannot remember the last time it was just the two of us at night in the house.  What a treat!  To celebrate we treated ourselves to a chinese take away and himself supping on a can of lager to wash it down.  When he was finished, off with his plate he went, to the direction of the sink and duly plonked it there, BESIDE the sink for the sink fairy to wash it, while he retreated to the sitting room, yes, you got it, to watch t.v!      I eventually went in to join him, as  I have had a rather hectic day, cleaning and sorting and chucking out, only to find him blissfully snoring in the chair!

I wonder what I will be doing in another 28 years from now!